After being sedentary for a month in the coffee region we were happy to get back on the road to explore southern Colombia. In this blog we will cover a Salsa Festival (music not the sauce!!), an indigenous market, a white city and ruins, all of which we saw in just 10 days while making new friends along the way! 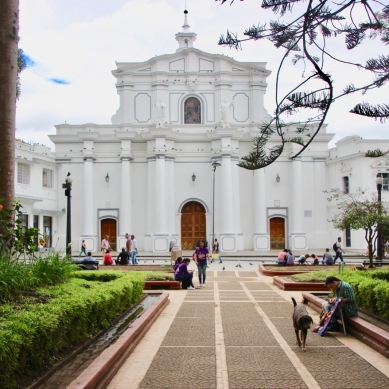 Founded in 1536 by a Spanish explorer, Santiago de Cali or Cali is the Capital of the Valle del Cauca department and Colombia’s third most populous city after Bogota and Medellin. With over 2 million inhabitants, it’s the main economic center in the south of the country and self-proclaimed Salsa music Capital of the world.

The large numbers of African slaves brought to work the sugar mills during the colonial era left a notable impact on Cali’s culture, specially in its music and dance. Cali is still trying to erase it’s drug related violence image of the 1980’s. The City is not packed with attractions but it has a nice vibe, friendly people and is gaining momentum as a tourist destination. The city has many neighborhoods from upscale to more modern but we spent most of our time in the Colonial section. 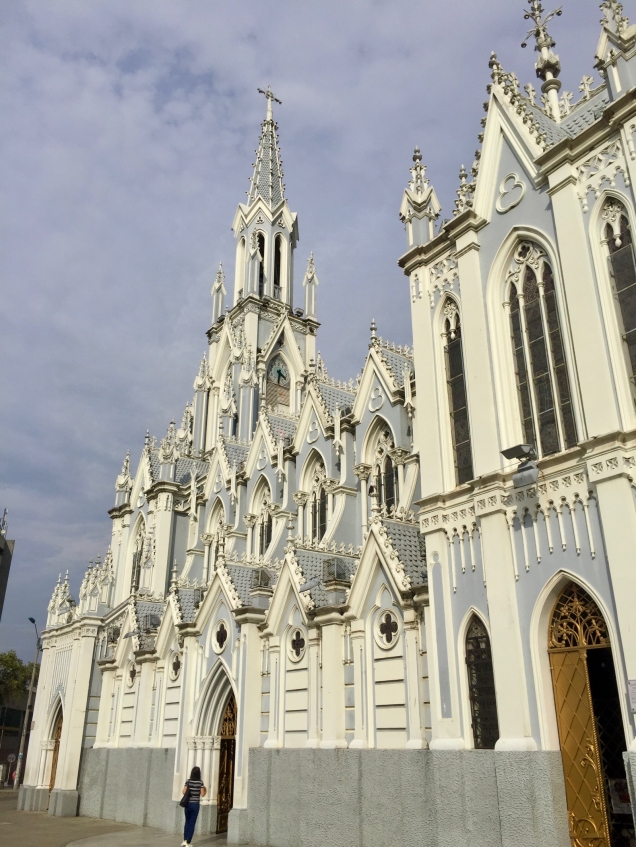 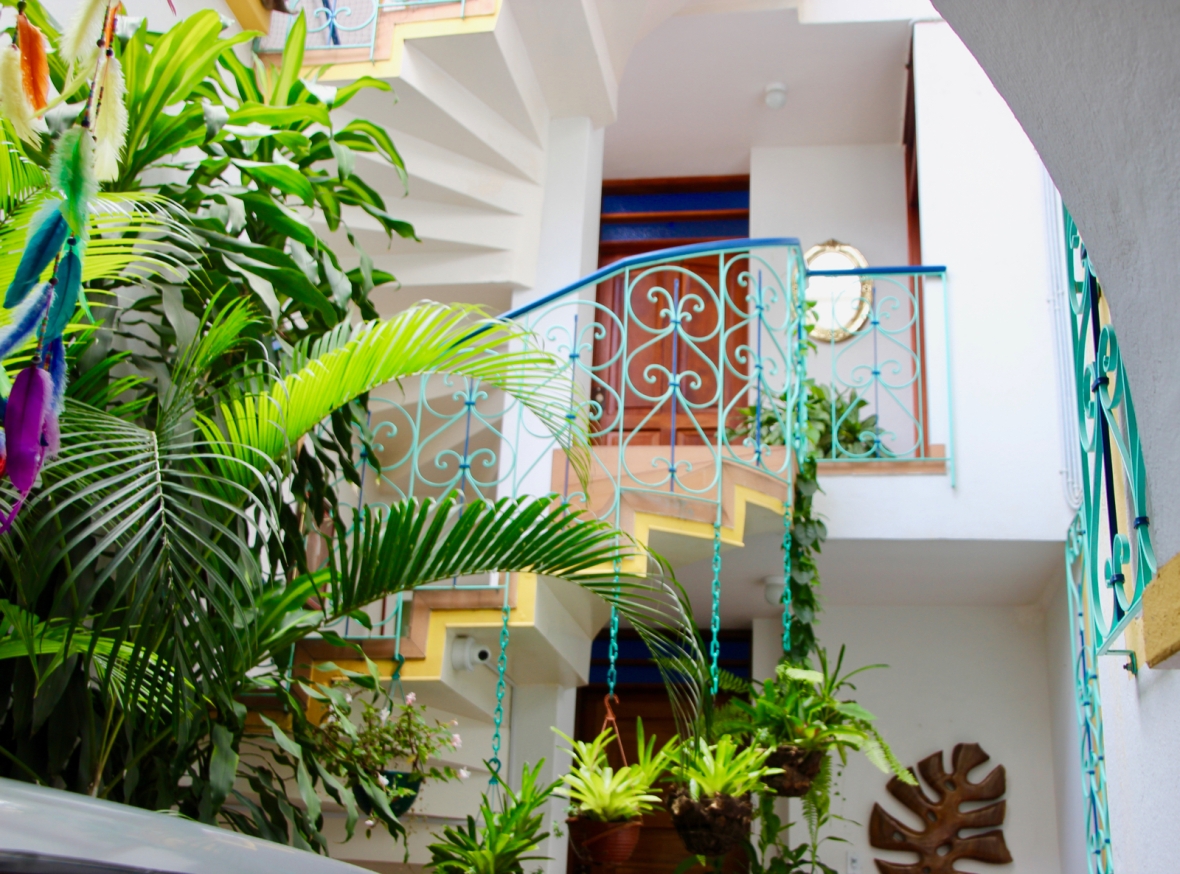 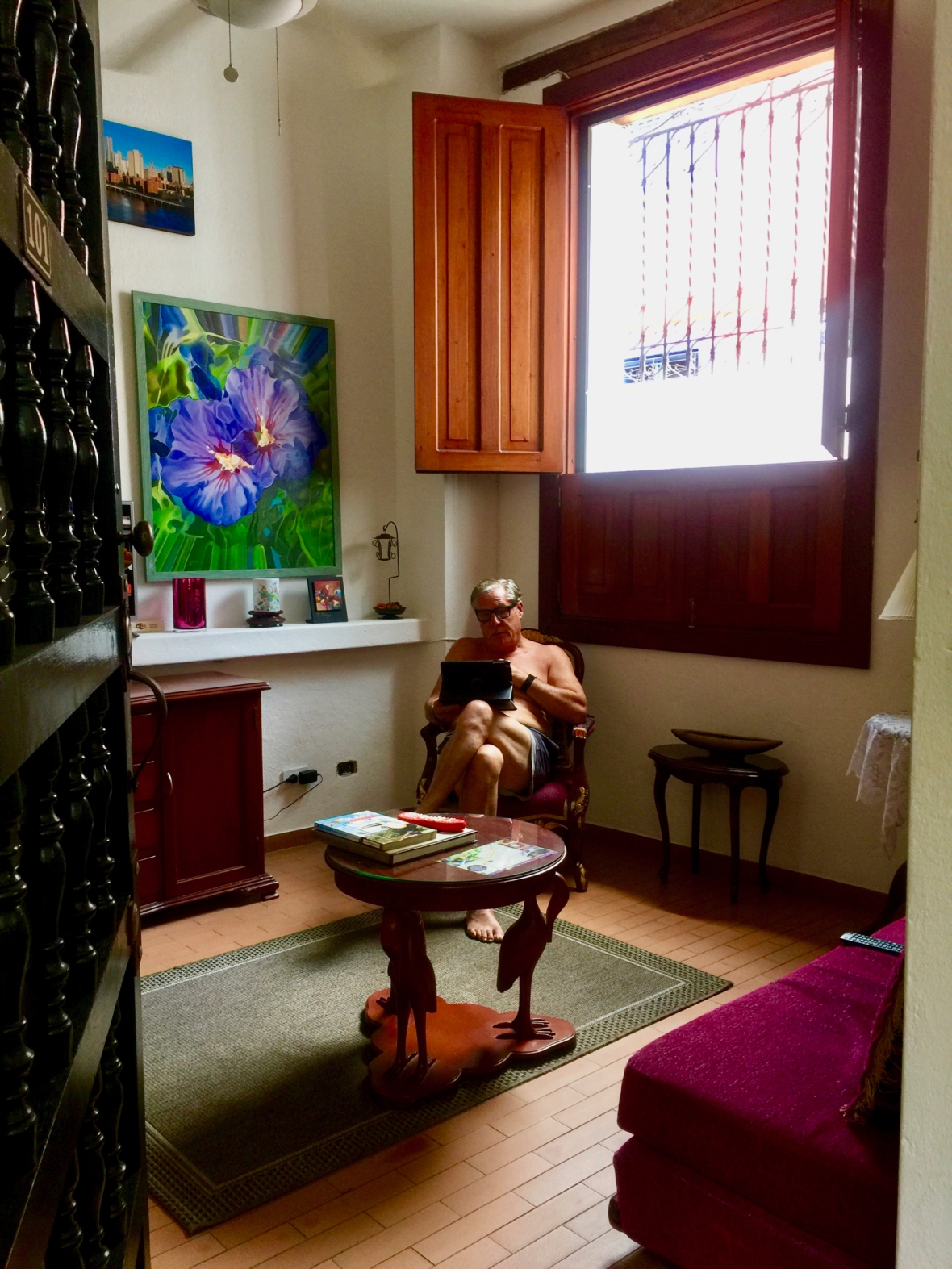 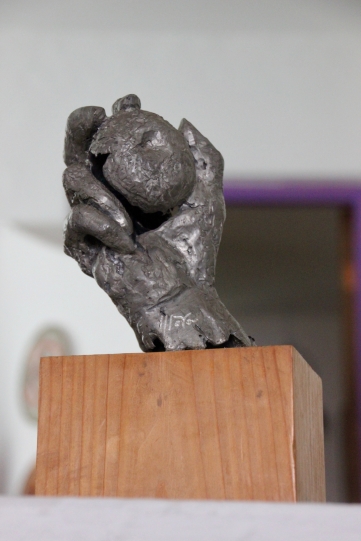 We came to Cali because we heard it was the XII Festival Mundial de Salsa,  Cali 2017 (Salsa World Festival) so without knowing to much what to expect we went to the stadium where it was held. We were told that it was free but when we got there the general admission seats were all the way up in the nose bleed section. Not long after we sat down, a group of 4 women arrived and one of them, an elderly lady, missed a step and was going to fall, Joe was quick enough to grab her and saved the night! A few minutes later, they offered us a a pair of VIP tickets and just like that we found ourselves sitting in the third row in front of the stage!!!

the Festival is more of a competition than a street celebration so we were a bit disappointed by that but we still had an amazing evening watching the dancers incredible performance and listening to the Puerto Rican Lebron Brothers an iconic Salsa band!

What we were hoping for, turned out to be “La Feria de Cali” (Cali’s Fair) the city’s most important cultural event known for it’s Salsa Marathon, horse riding parade and dance parties. It has been celebrated since 1957 between December 25 and 30. Oh well maybe next time! 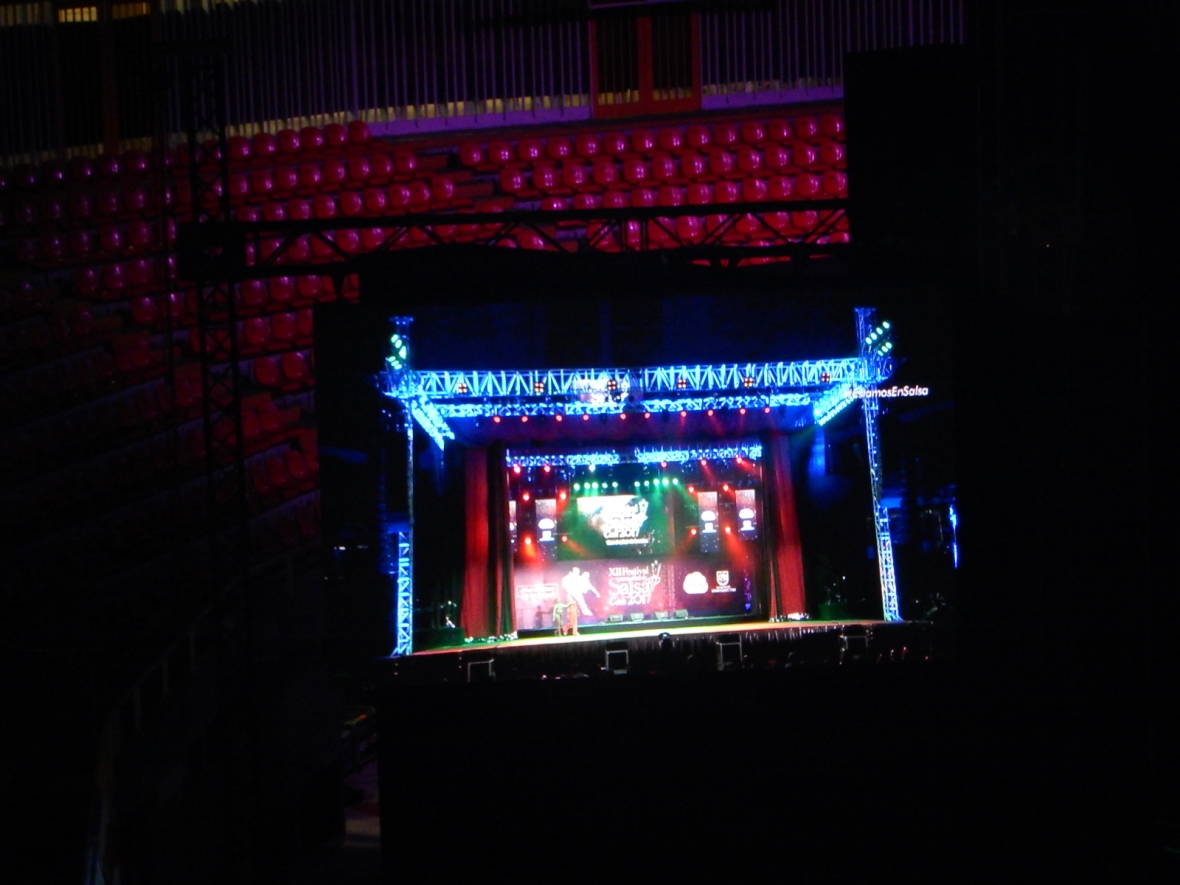 View from way up there before we got our VIP tickets! 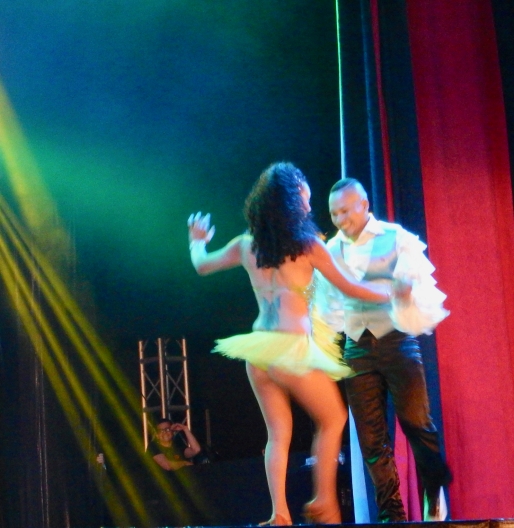 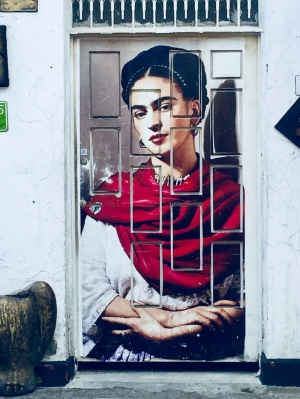 This singing group was recording a video with the city of Cali as a backdrop.

While staying at the Airbnb in Cali, we parked Silver a few block away in a small courtyard, the owners were so nice and friendly that when we left they asked us where we were going. When we told them that we were heading south on highway 25 towards the City of Popayan, immediately, one of the brothers got on his phone calling some friends that would be happy to let us park safely on their property outside the little town of Mondomo which was half way, a perfect stop along the way.

Another great example of Colombian hospitality!

Every Tuesday, the Guambiano community (one of the most traditional indigenous group of Colombia) descend on the picturesque Andean mountain town of Silvia to buy, sell and exchange their goods and handicrafts. They come by bus from the surrounding villages wearing their traditional dress; men in blue skirts with pink fringe, rectangular ponchos and bowler hats and women in hand-woven garments and beaded necklaces. Market day is a big social event in this part of the world!

We stocked up on fresh fruits and vegetables, had lunch, purchase a bead necklace and Joe got a haircut, all for less than $15.

Silvia sits in this beautiful valley at an elevation of 2,800 meters (9,200 feet) making it nice and cool. A stark contrast with hot and humid Cali.

The young girls ware two different kinds of hats, a bowler hats like the adults or a round straw hat.

Natural medicine and herbs are always present in markets so are marihuana magic lotions!

The lady on the right cracks me up! 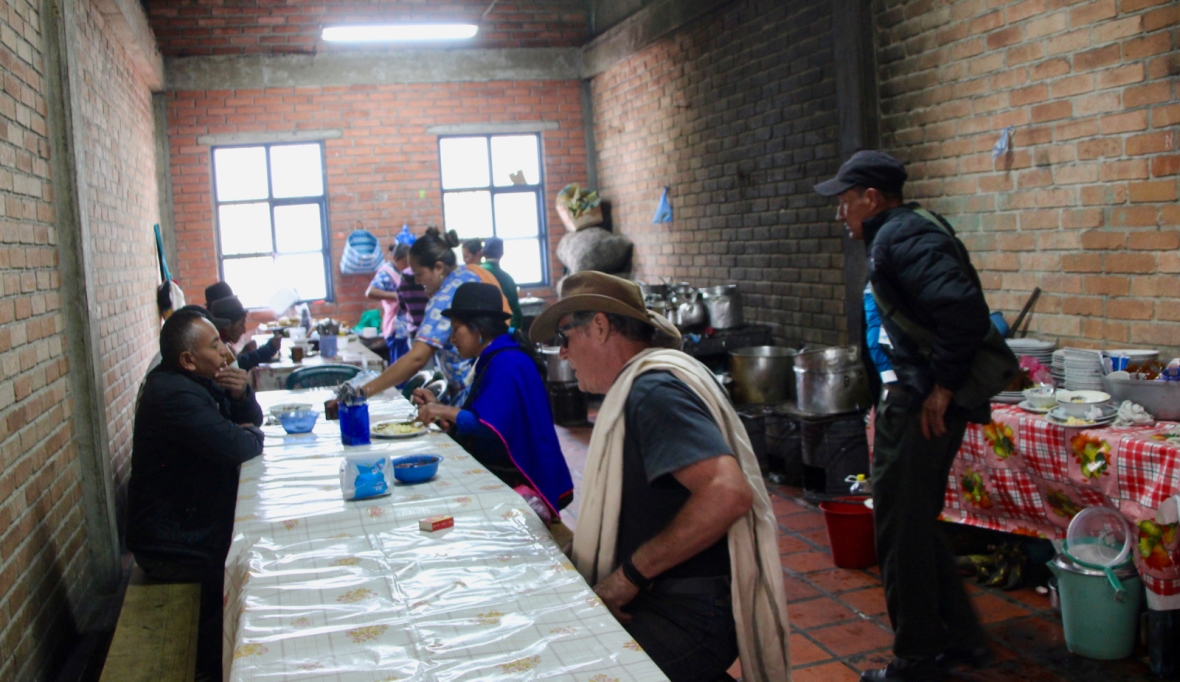 Pop up restaurants in markets are always good!

Joe with our bag of produce, it looks small but we had quite a lot: potatoes, carrots, peas, lima beans, cucumbers, ginger, avocados, artichokes, onions, peppers, tomatoes, oranges, limes and bananas. 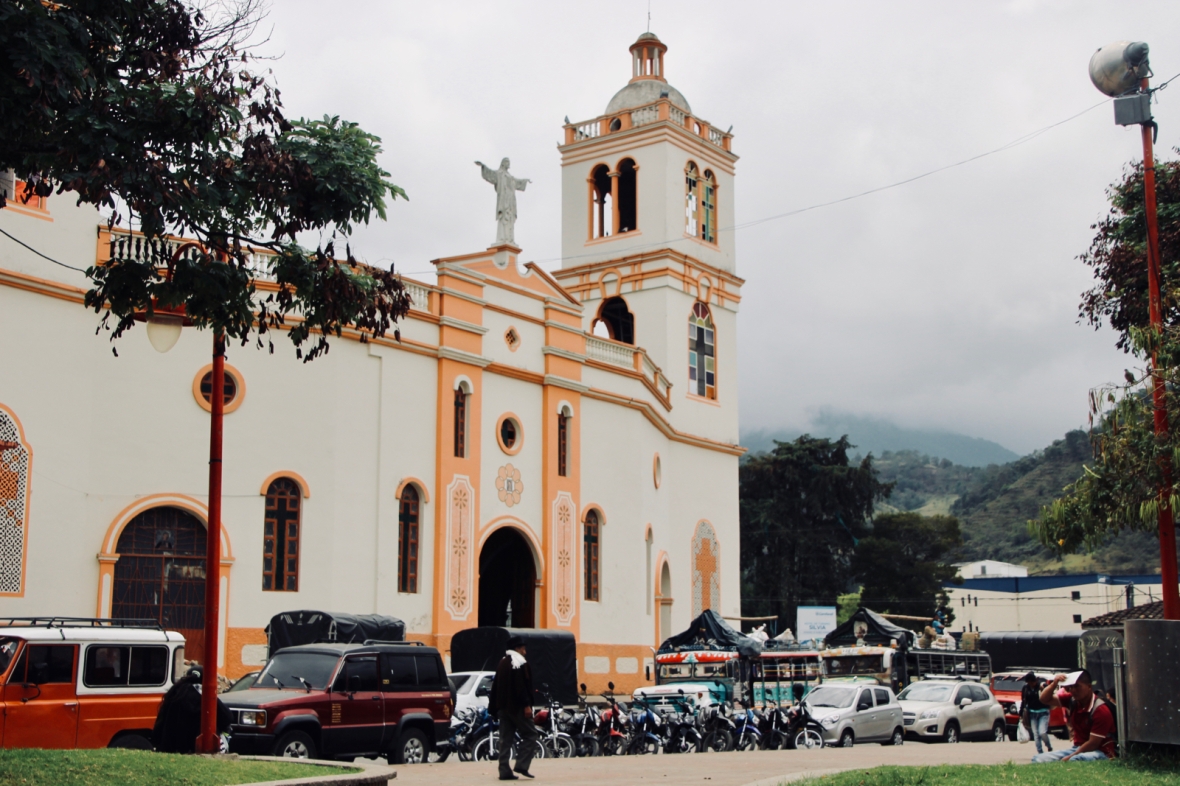 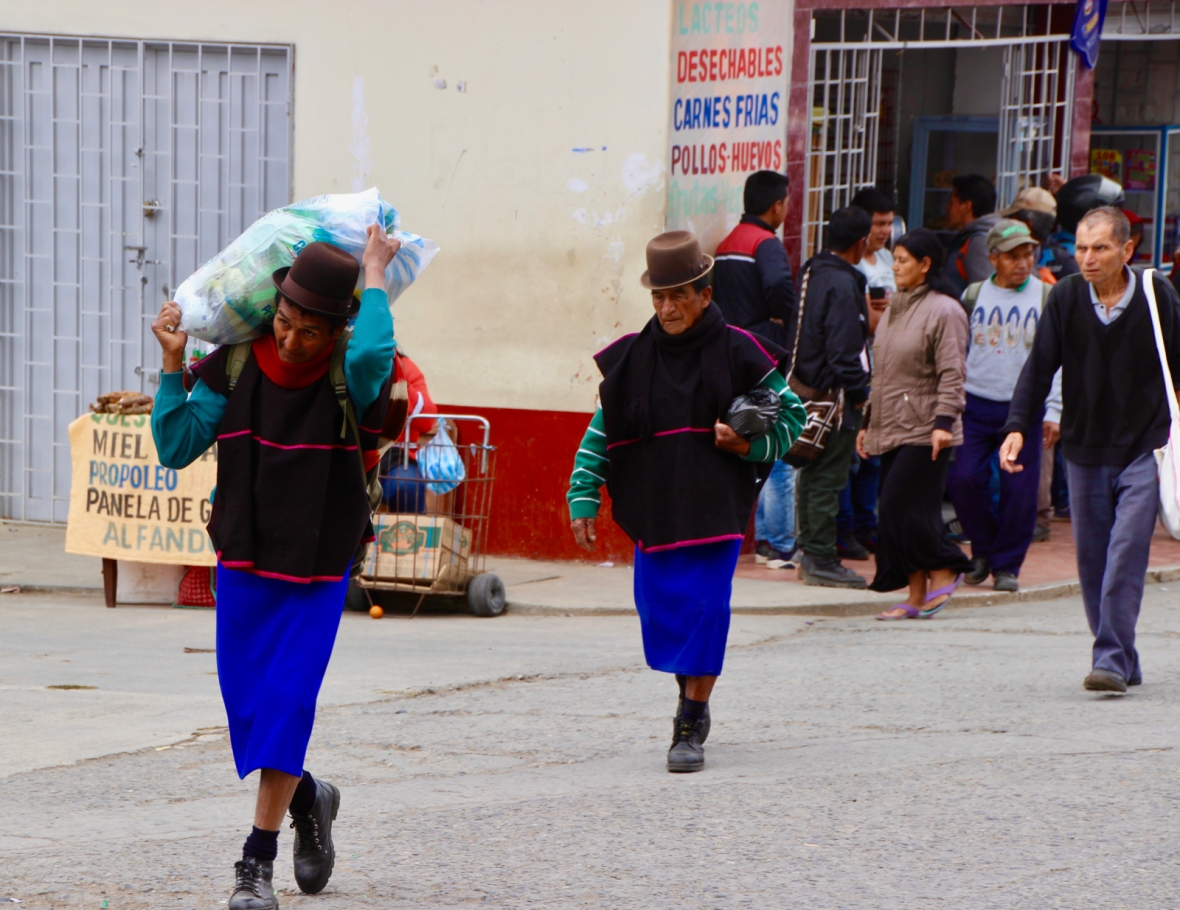 I think they are so stylish … I love it! 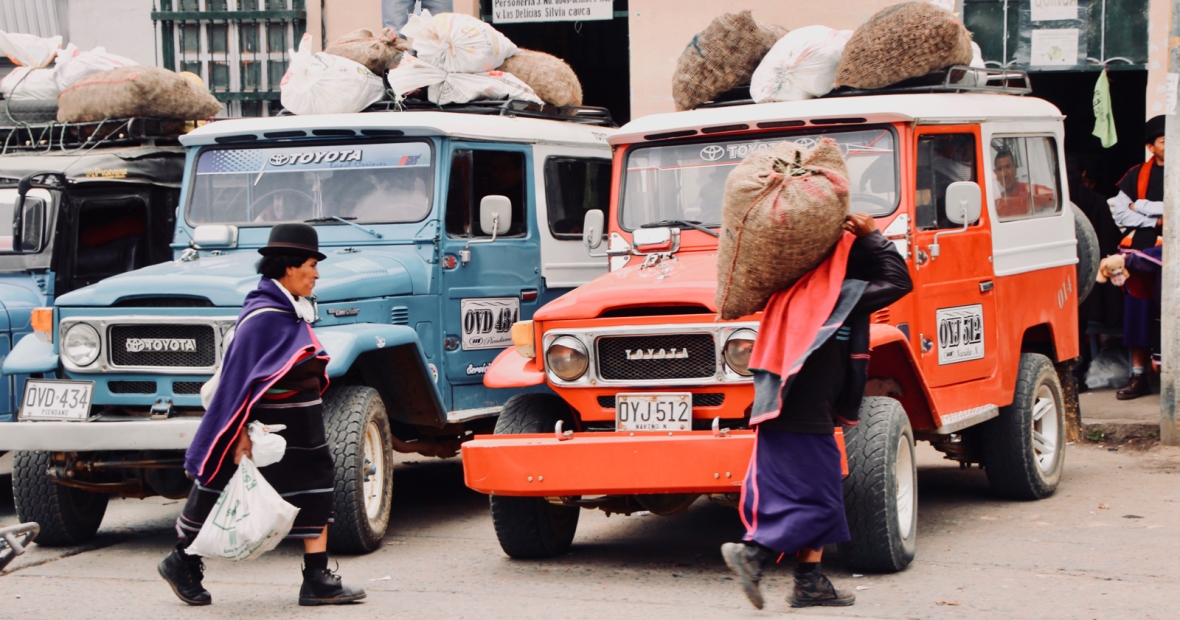 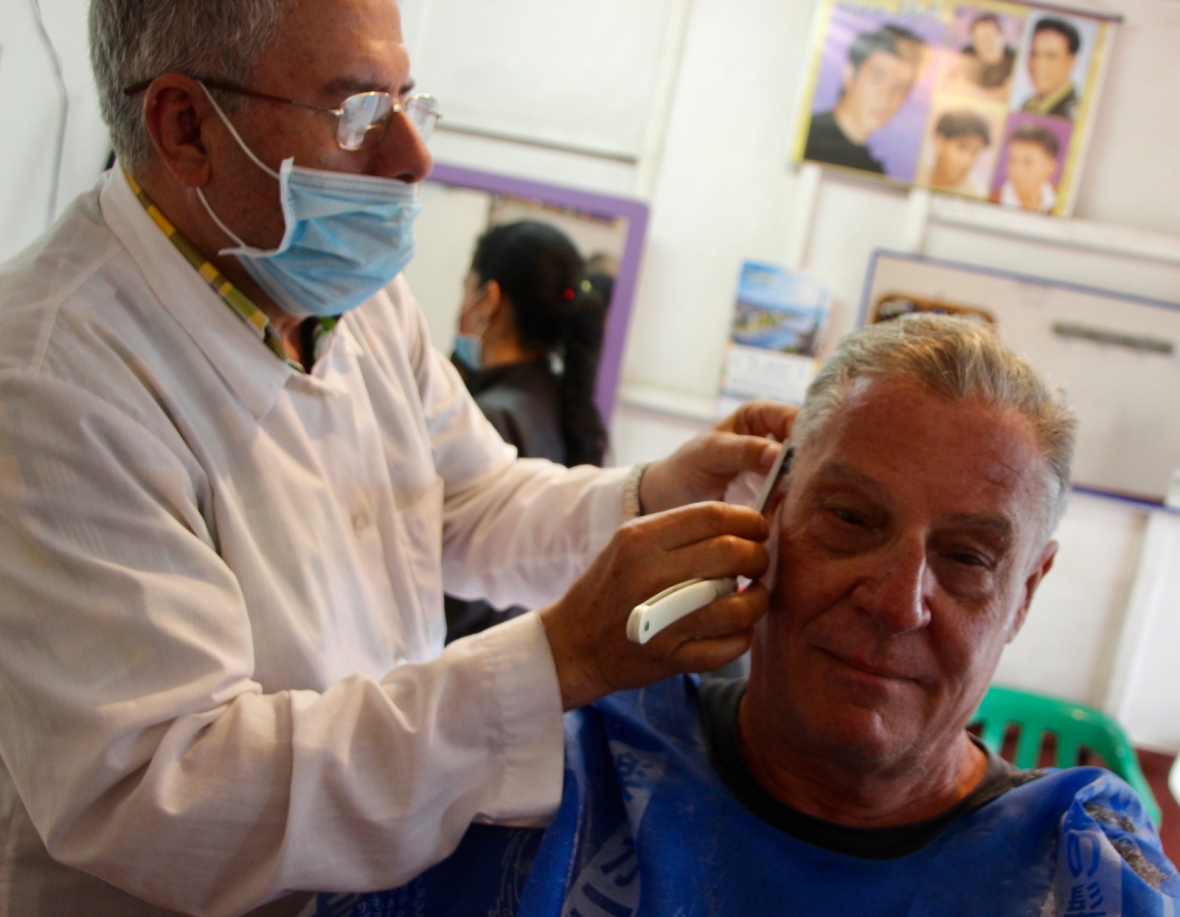 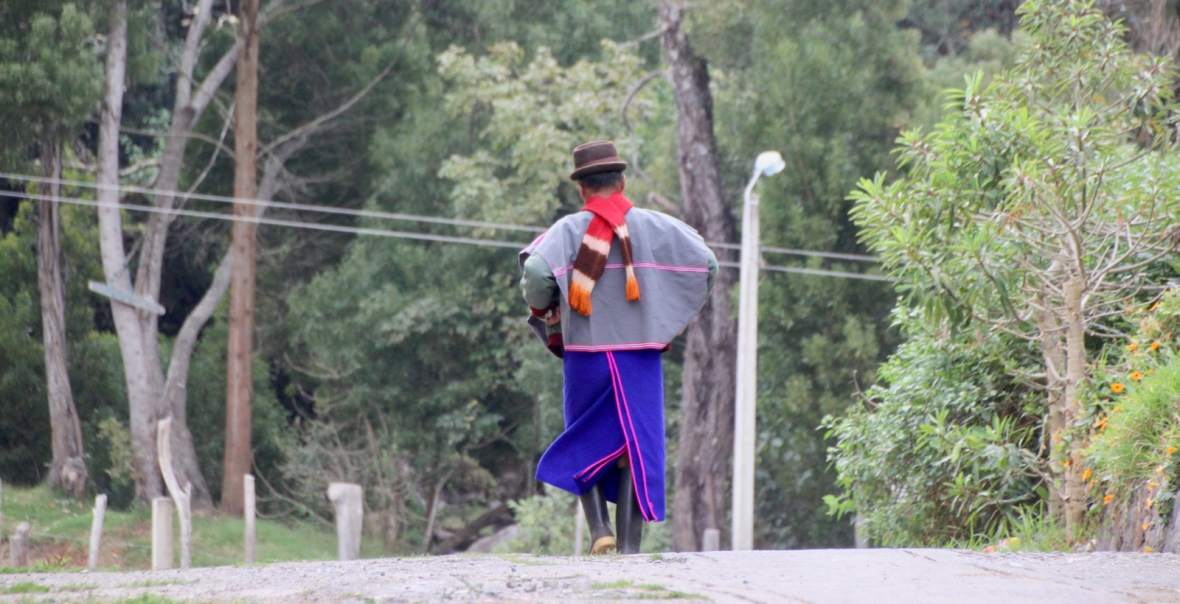 On our way to Popayan, we drove through the small town of Piendamo, where we gave our beach cruisers to these two girls. At first they weren’t to sure what was going on when we pulled over to get them off the bike rack but once they realize it was a gift, they were so happy.

We camped just North of he city where we met a Quebecois/Colombian couple, they were nice enough to accompany us for a tour of Popayan’s historic center. We left our vehicles securely parked at Eco Parque Rayos del Sol and took a bus to town.

The Colonial City of Popayan, founded in 1537, also known as the White City for its white wash building is the capital of the Cauca department. After a disastrous earthquake in 1983, the residents banded together to rebuild and made it one of Colombia’s prettiest cities.

Popayan’s Semana Santa (Holly week) celebrations are the second largest in the world after Seville in Spain.

So nice to meet a guy from Quebec, Eric. He met his wife Yadira in Bogota where he worked for a while, they have been living in Southern Florida for the last 14 years. Small world …. they were traveling through Colombia in a Jeep Cherokee.

The Cathedral seen from the main square, Caldas Park. 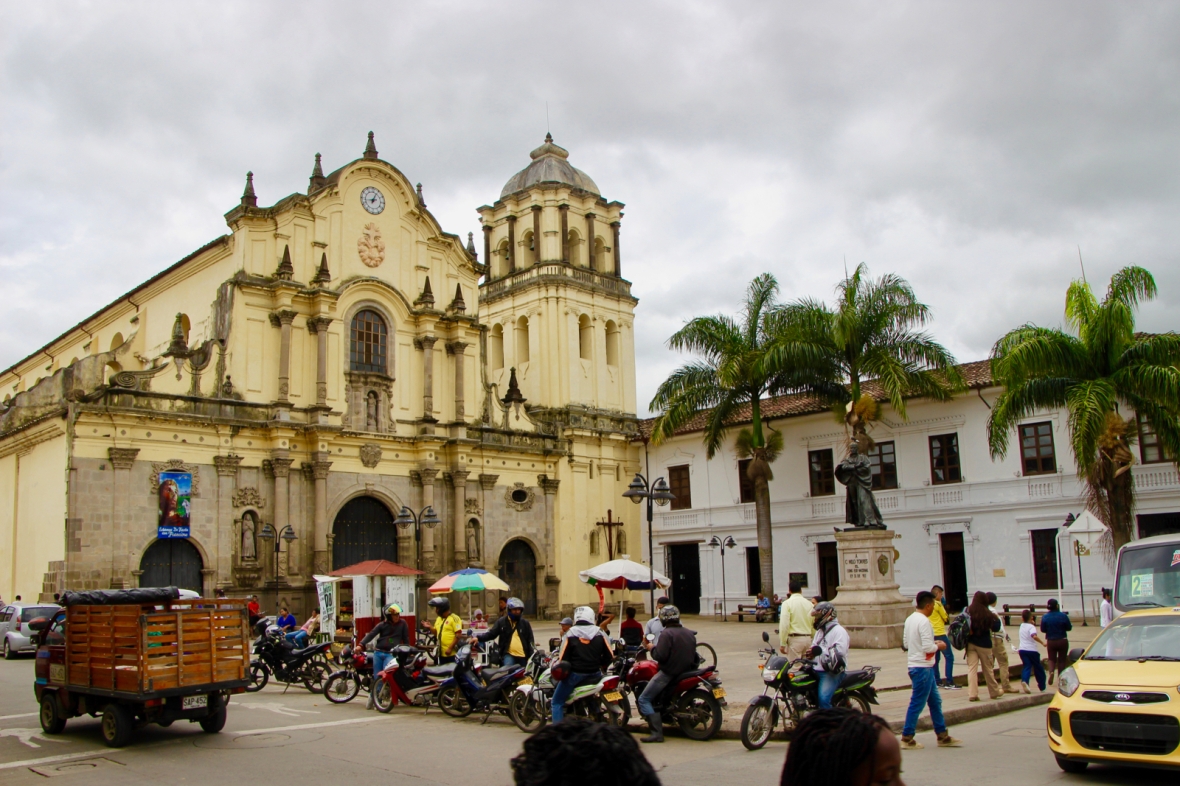 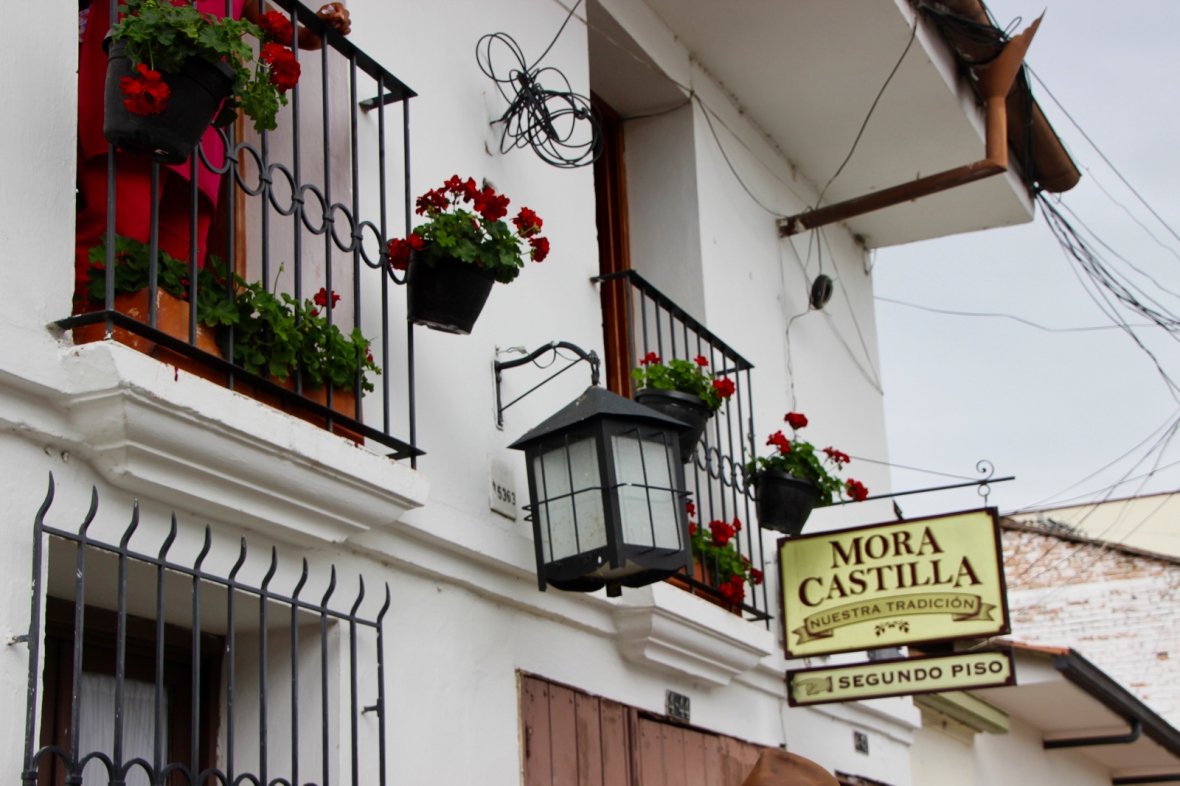 We had a nice traditional lunch of empanadas, tamales with peanut sauce, patacon and a drink called champus. It is made with maize, a fruit called lulo, pineapple, sweetened with panela and seasoned with cinnamon, cloves and orange tree leaves. 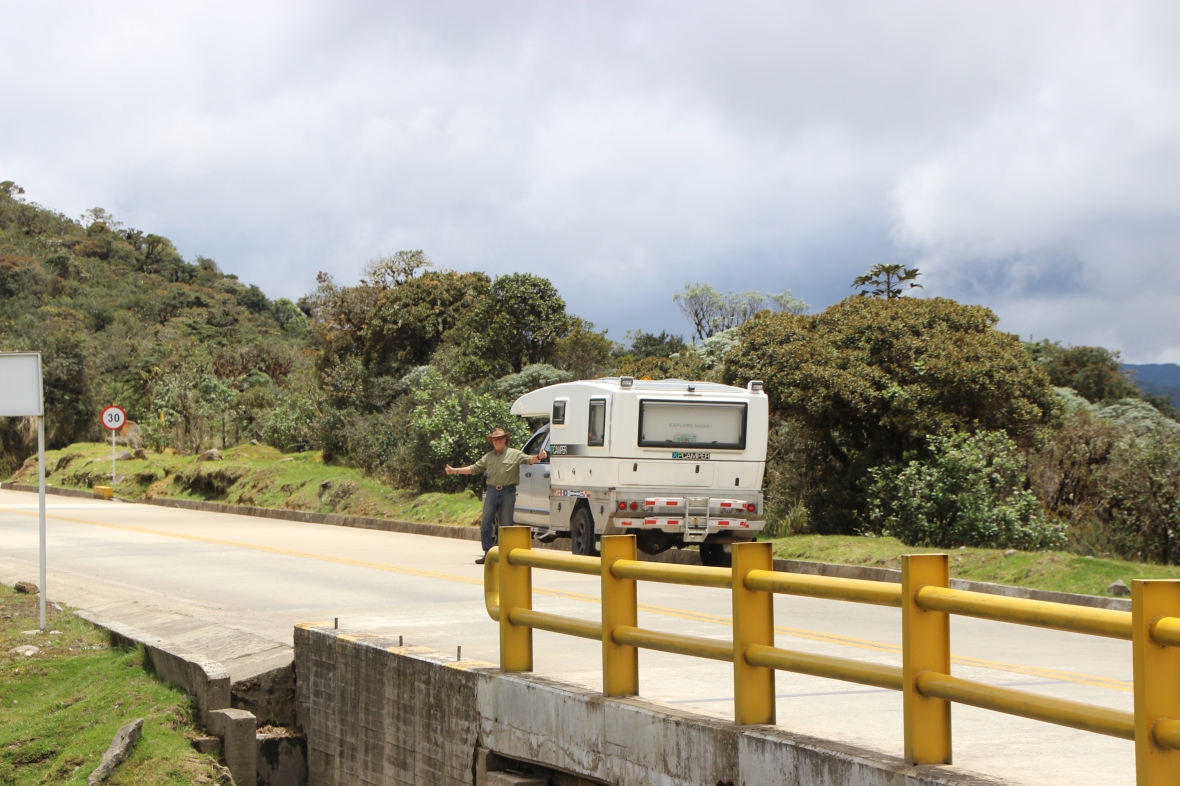 Route 26 from Popayan to our next destination, Tierradentro Archaeological Park, started great but it quickly deteriorated. It took us 3 hours to do 60 miles. Still not to bad according to Colombian standards.

When we got to the Park, three bus loads of school kids were there. We chatted with them for a while in our broken Spanish and of course the brave ones wanted to see inside the camper. One of the girl’s name was Tatiana so I told her that it was a Russian name. That had such an effect on her that all her class mates were asking me where their names were from … Spain, France, Italy … what did I get myself into???

Can you imagine kids in the US or Canada riding on the roof of the bus for a school outing?

A Unesco World Heritage Site since 1995, it is one of the ancient Pre Columbian cultures of Colombia and related to the nearby but much older San Augustine culture. The Tierradentro culture is mostly known for its hypogea, or underground temples and tombs. The Park spreads out through four different mountainous sites so there is a lot of walking involved which made it even more interesting. It was nice to walk through the country side and see a bit of the local life, of this very remote area, at the same time.

This archaeological treasure is relatively unknown and well preserved because of its location in the eastern Cauca department, an area that was long territory controlled by the FARC guerrilla group until earlier this year (2017).

The tour starts with a visit of a small museum then continues following a mountain path to arrive at different sites where a guide gave us a brief description of the ruins. Good thing the signs are both in Spanish and English.

We met a really nice Italian couple and decided to do the visit of the park with them the next morning. We were pretty much only the four of us the whole day. 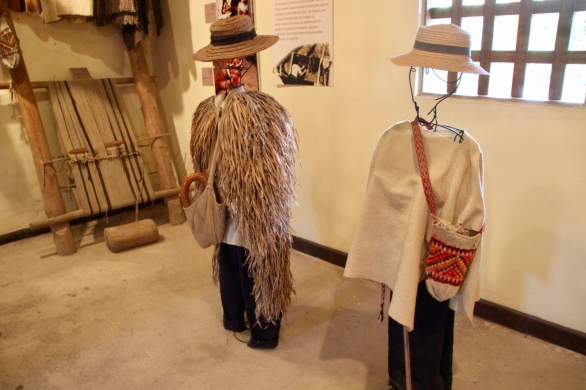 These structures were put in place to protect the entrance of the underground tombs from the elements.

Going down to a burial chamber! 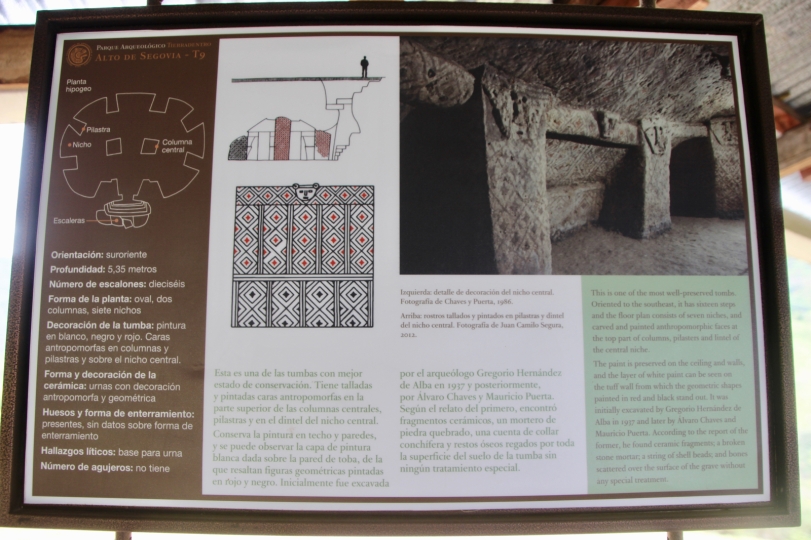 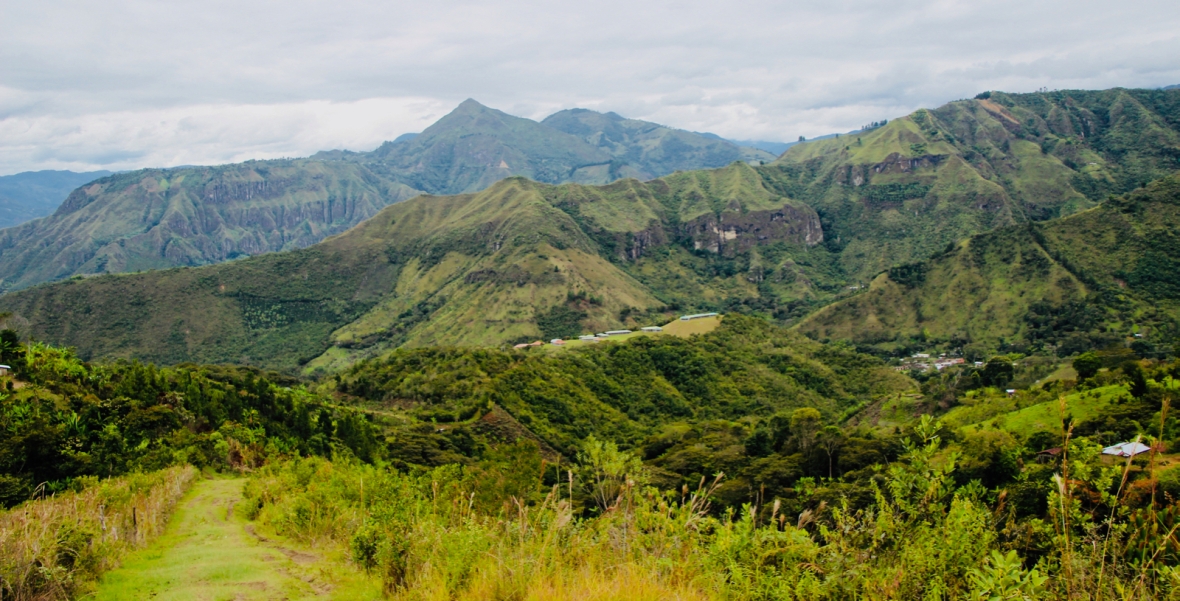 Approaching the second site we can see the green roofs of the first one in the clearing.

This site was more about statues

Walking back through the mountain road 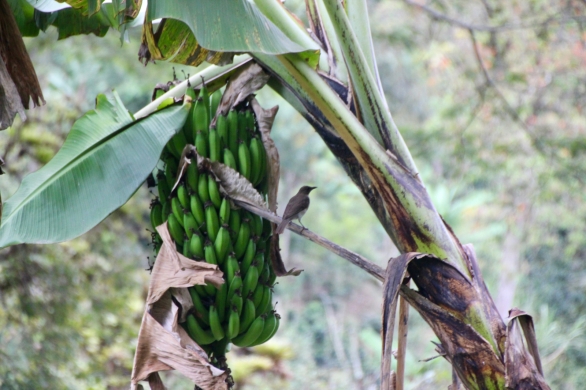 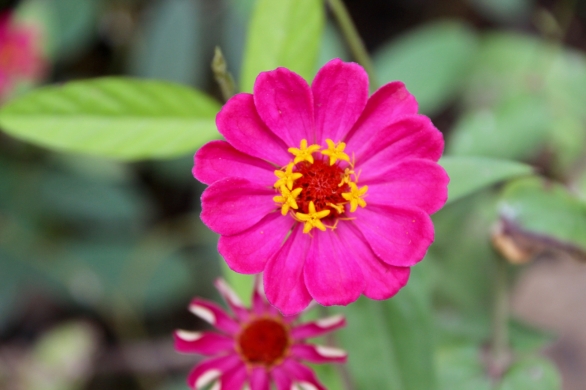 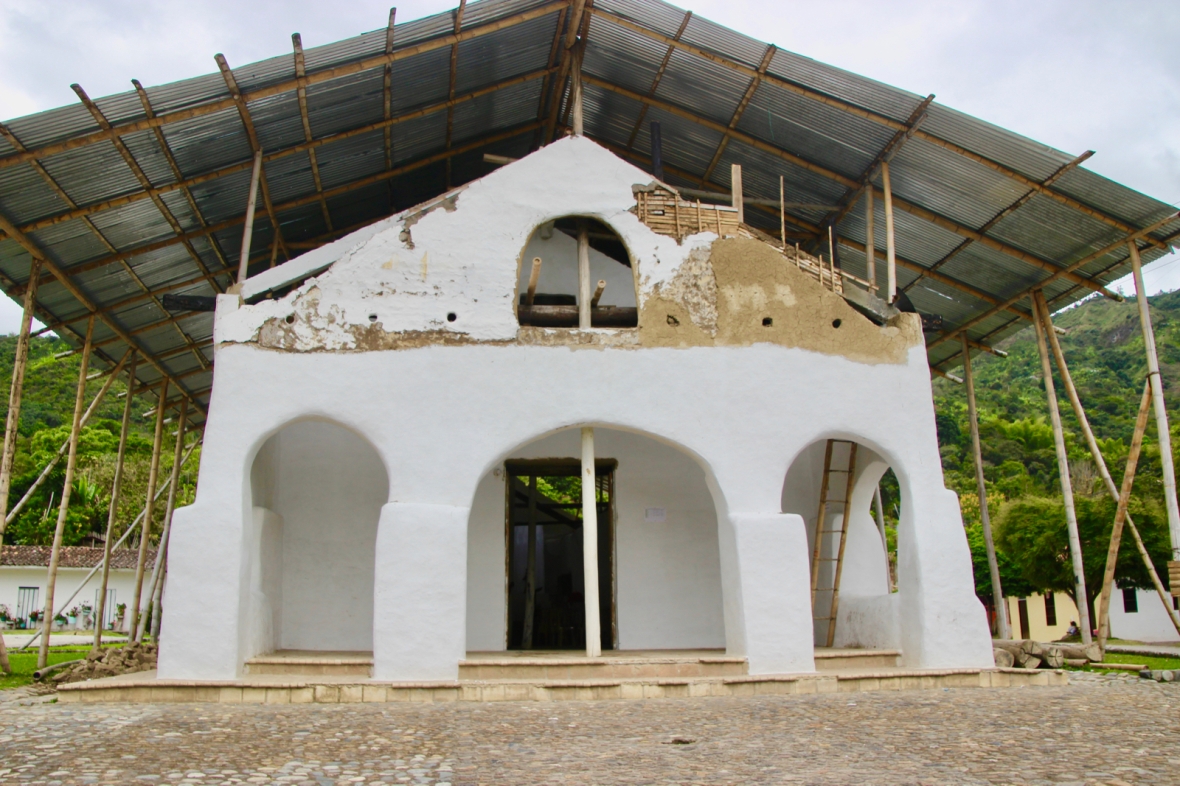 This beautiful 200 year old church was being restored in the tiny village of San Andres de Pisimbala where we had lunch. 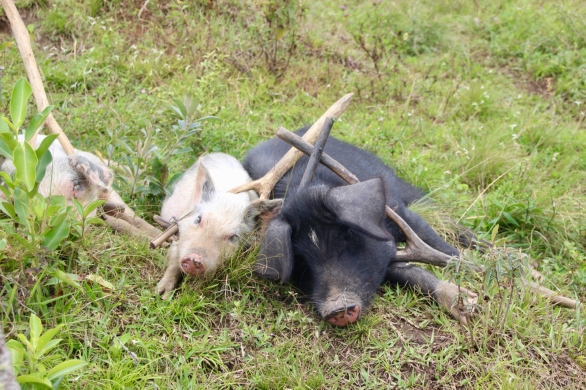 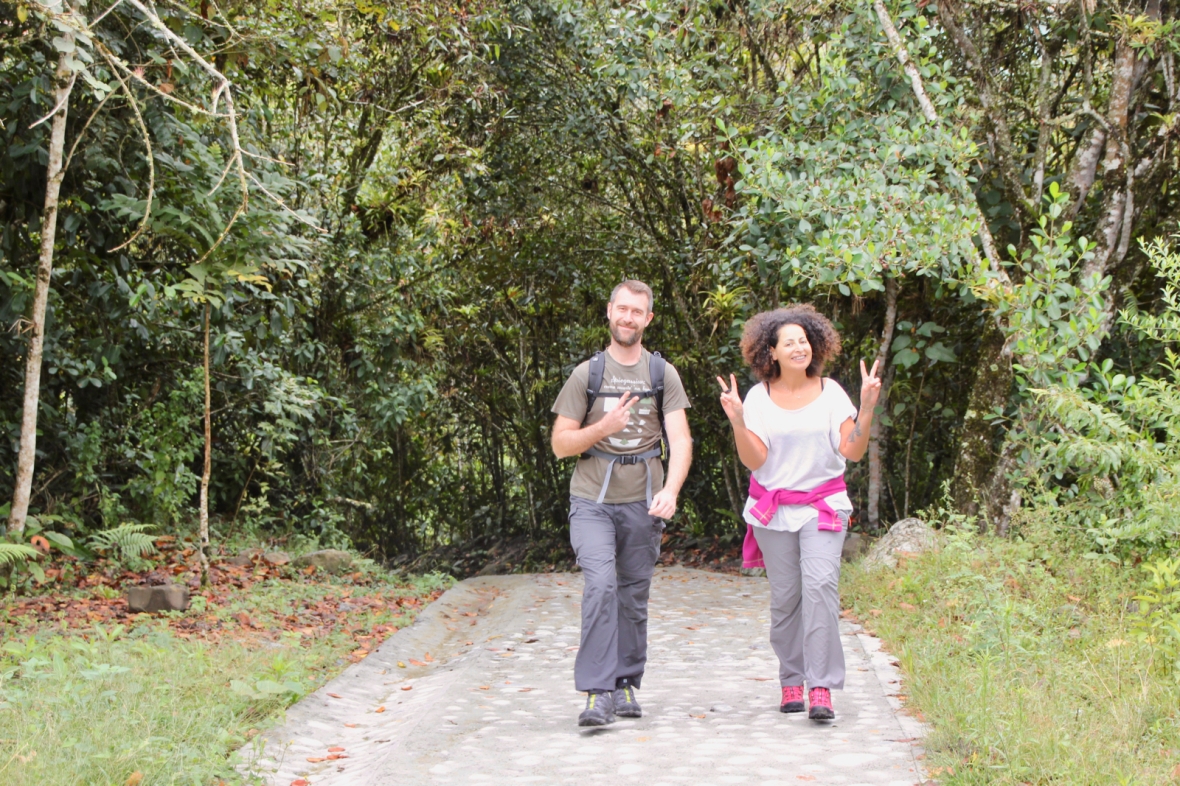 Giorgio and Imane, see you in Italy maybe one day! 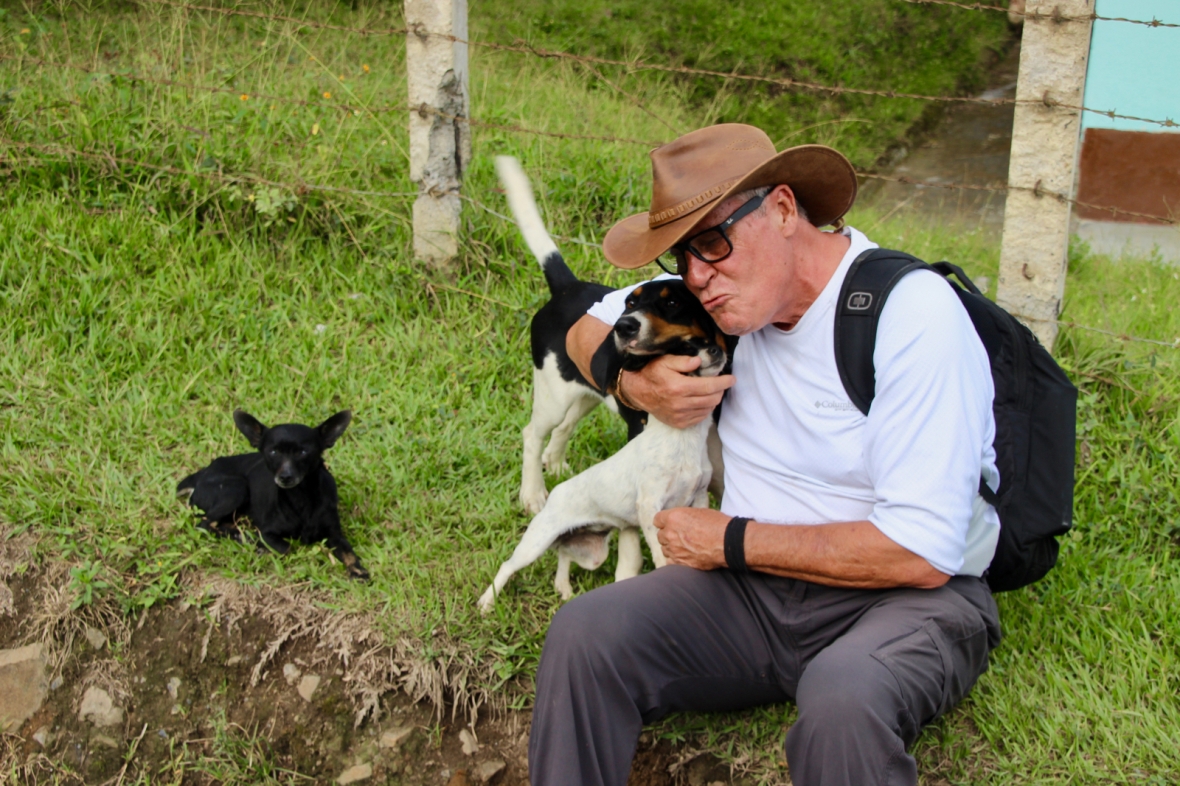 Next: Colombia – Part 7 A desert, a red river, more ruins and the most beautiful church … Stay tuned!

I’m sure that by now you have noticed that our blog posts are way behind. Even though I enjoy writing it, I don’t want it to become a burden and the internet being what it is in remote areas of South America, I only write when I have a long period of down time and good WiFi.