After tree weeks traveling with family around Colombia, we were happy to be once again on our own. On August 3rd, 2017 we left Guatape to return to Al Bosque Hostel and Glamping in Santa Elena, on the outskirts of Medellin, to pick up the things, they were nice enough to store for us in order to clear the back seat of the truck to make room for the kids, but also for Medellin’s Annual Flower Festival 60th edition – July 28 to August 6, 2017.

From Santa Elena we took a bus to Parque Arvi then the Metrocable (cable car) to connect with Medellin’s Metro system.

For so many years, Medellin was synonym of violence but in the last few years it has experienced an unparalleled renaissance, a great example of urban renewal, it was named the world’s most innovative City by the Urban Land Institute. Forward-thinking urban and social projects have not only transformed Medellin’s landscape but the lives of it’s residents. One of their most recognized success, is their transportation system: in addition to the country’s only metro, there’s the stunning series of outdoor escalators going up the steep hillside through the infamous Comuna 13, once the city’s most dangerous slum, now a popular walking tour to see wonderful Street Art. Connected to the metro are five metrocable lines and a public bus system. 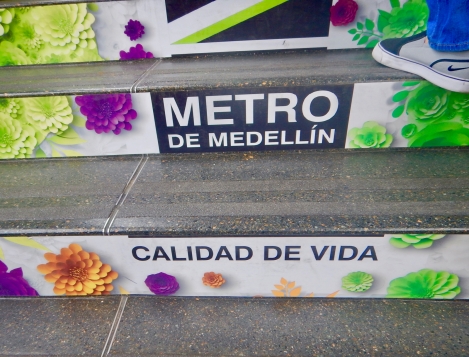 Medellin, capital of the Antioquia province, also known as the City of Eternal Spring for it’s temperate climate, has many Museums, cafés, great nightlife, good restaurants, an increasing number of businesses. It has become one of Colombia’s most popular destination for tourists, expats and digital nomads.

We were lucky enough to be in Medellin during the biggest annual event Feria de Las Flores (Flower Festival) with a full week of events. 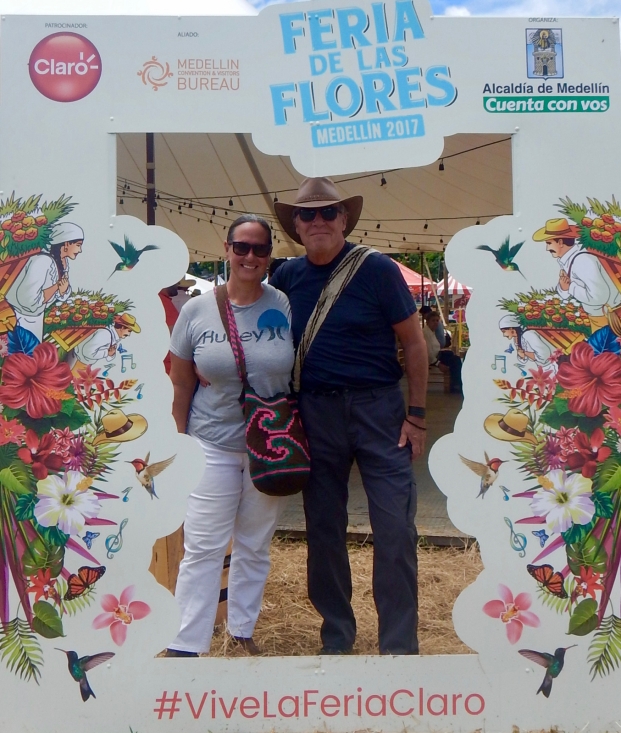 Plaza Botero, where 23 larger then life sculptures,  of the famous Colombian artist Fernando Botero are on display.

The flower arrangements are endless throughout the City and there is a big parade where you can see the grand finale of all the Silleras but really what it’s all about, is people getting together to enjoy each other with great food, music, dancing and a few too many shots of Aguardiente!

The last Sunday of the festival people head for the mountains (where we were camped) around Santa Elena, where the real party takes place! 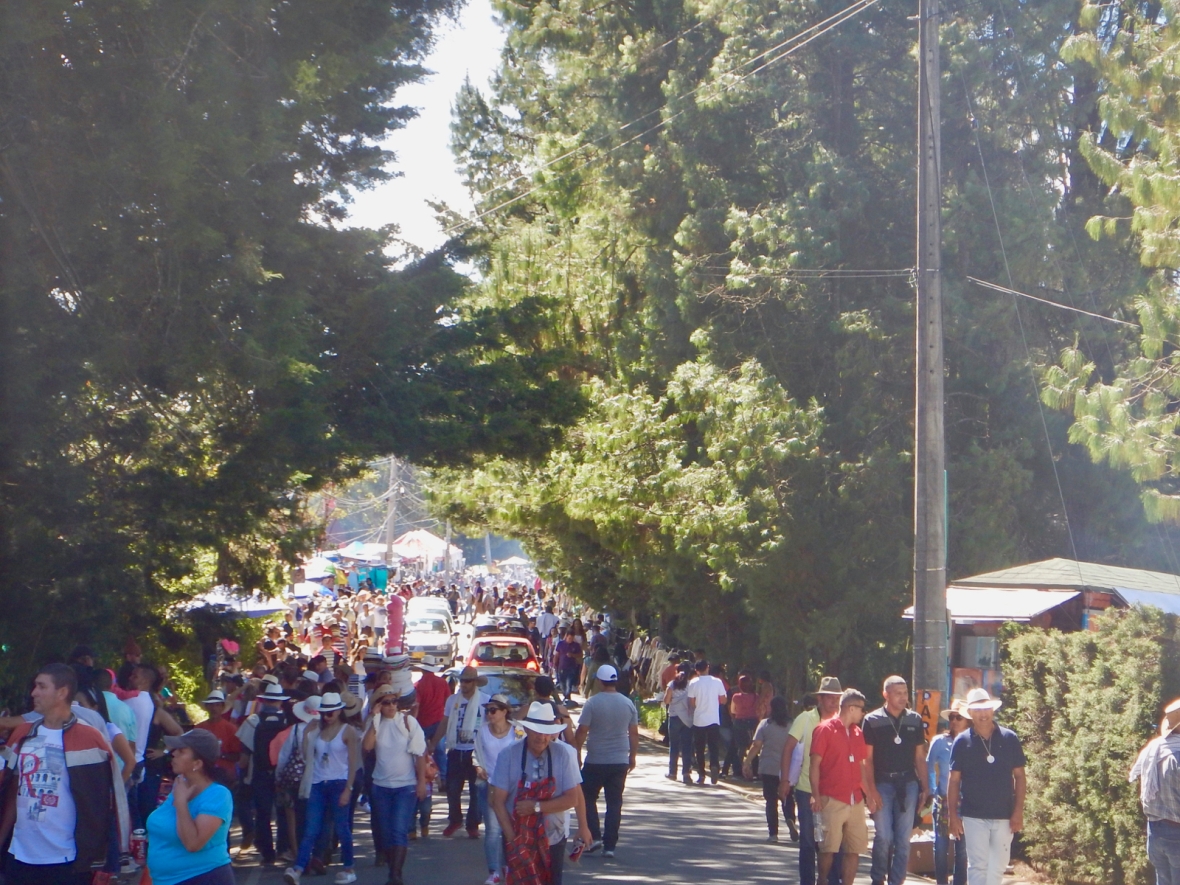 Paisas and city folks flock to the mountains outside of Medellin to celebrate! 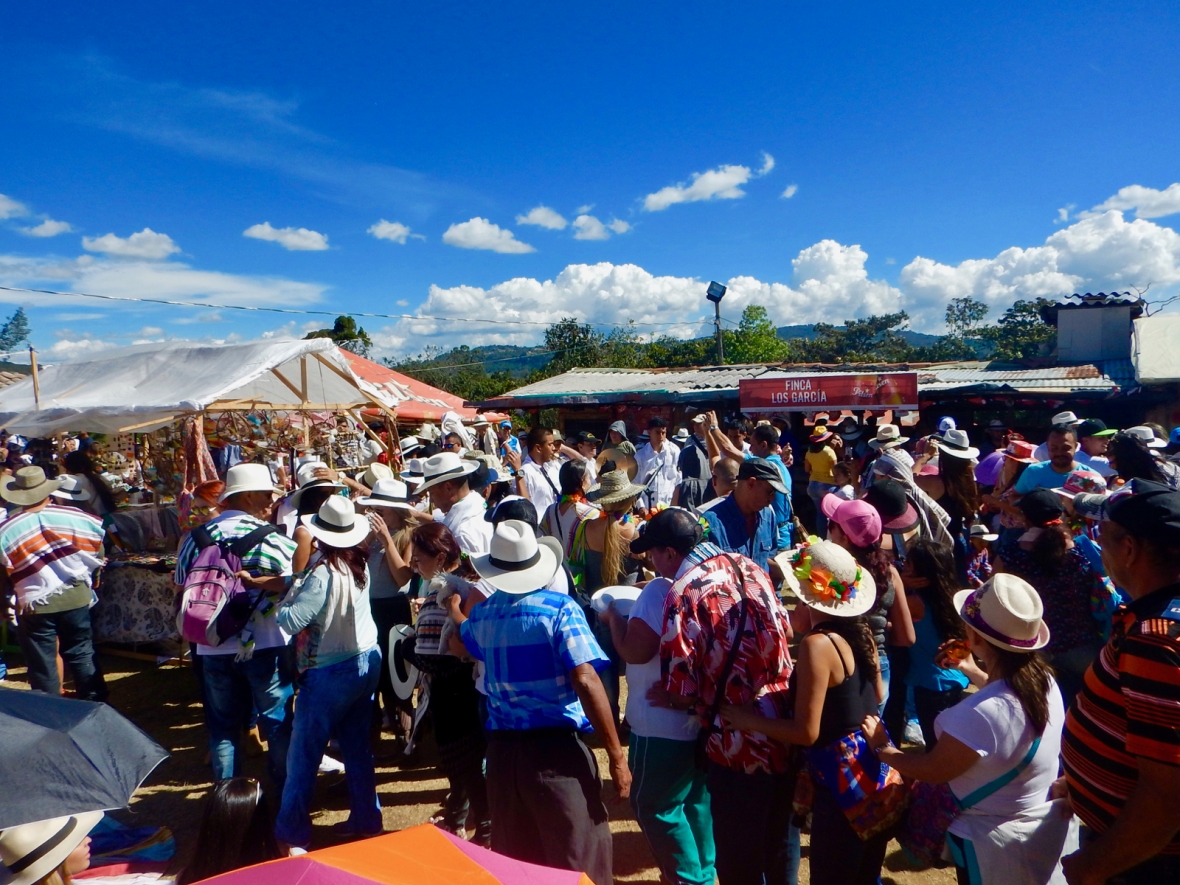 Traditionally, farmers called Silleteros left the mountains of Santa Elena carrying flowers on their backs on a rack resembling a chair called silletas. The flowers would be sold in the markets of Medellin. 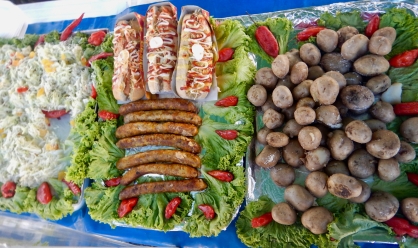 And of course the beverage of choice: Aguardiente, Colombia’s national alcoholic beverage made of alcohol, sugar, anise and water!

Party time with the locals! 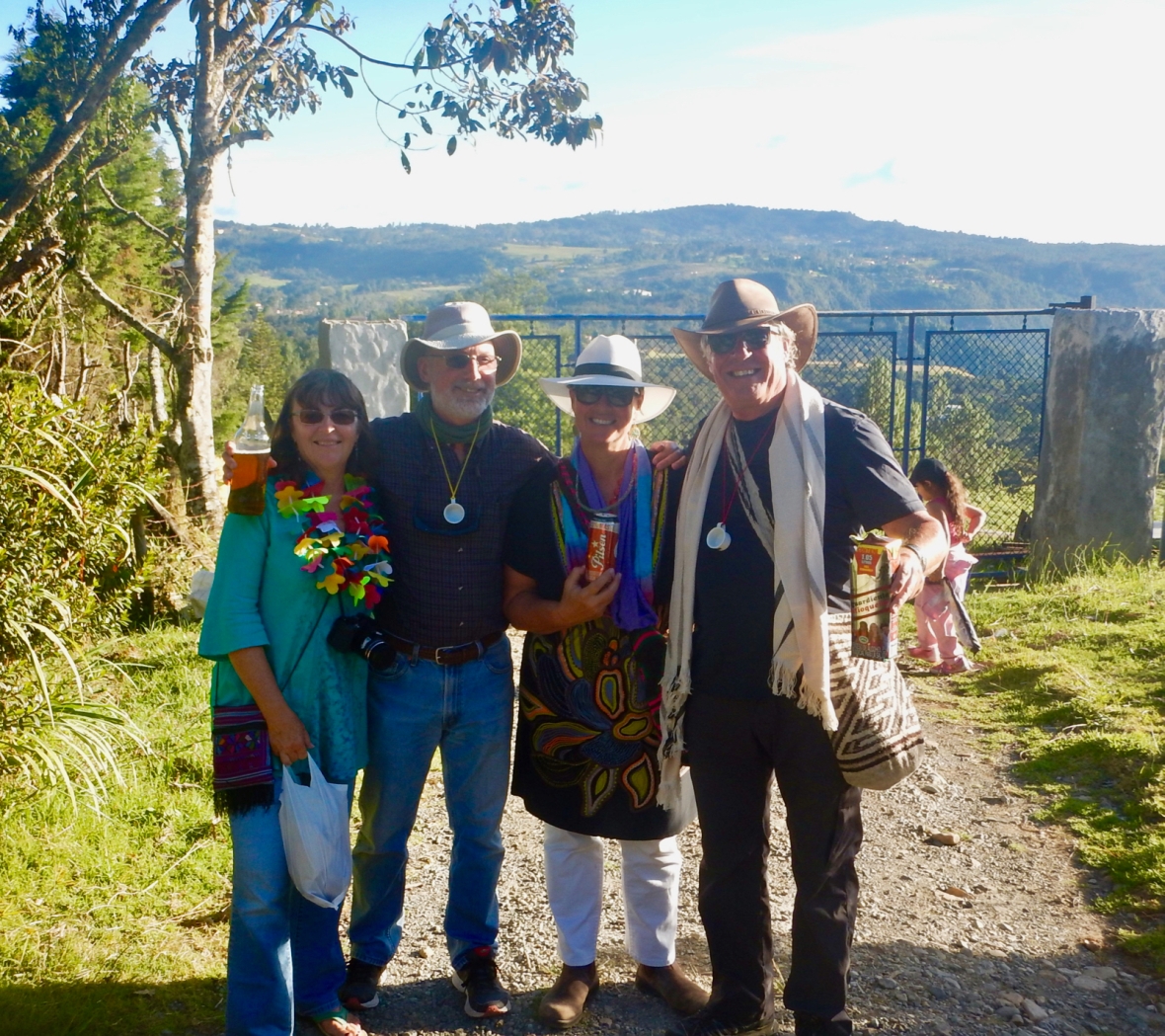 Look at Doug and Joe carrying little plastic cups around their decks to share shots of Aguardiente with everyone they meet! 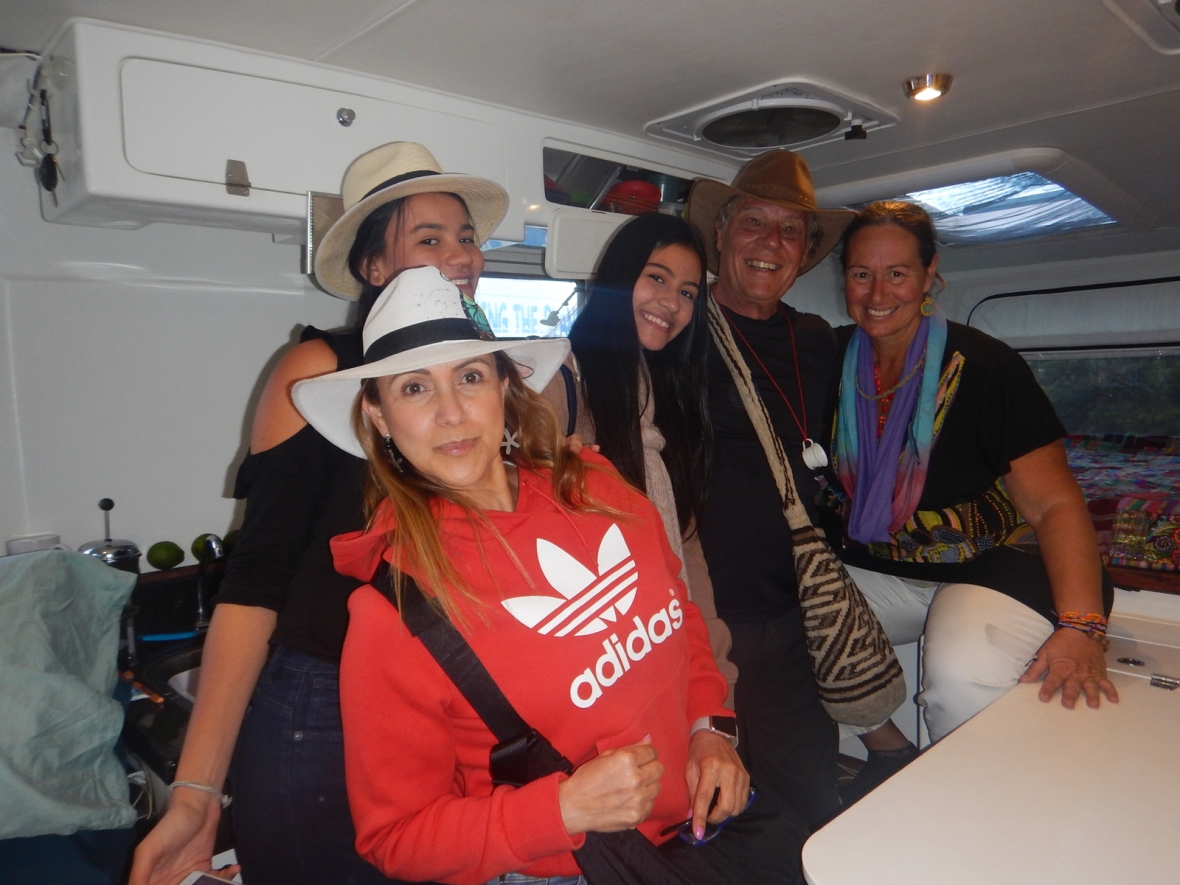 Colombians are the most friendly and curious about our lifestyle and always asking if they can see the inside of our camper.

The day after the end of the Flower Festival, we received a message from our Canadian friends Christine and Mark to know if we were interested in attending a concert in Bogota, why not? we left the mountains of Medellin and headed for Bogota. 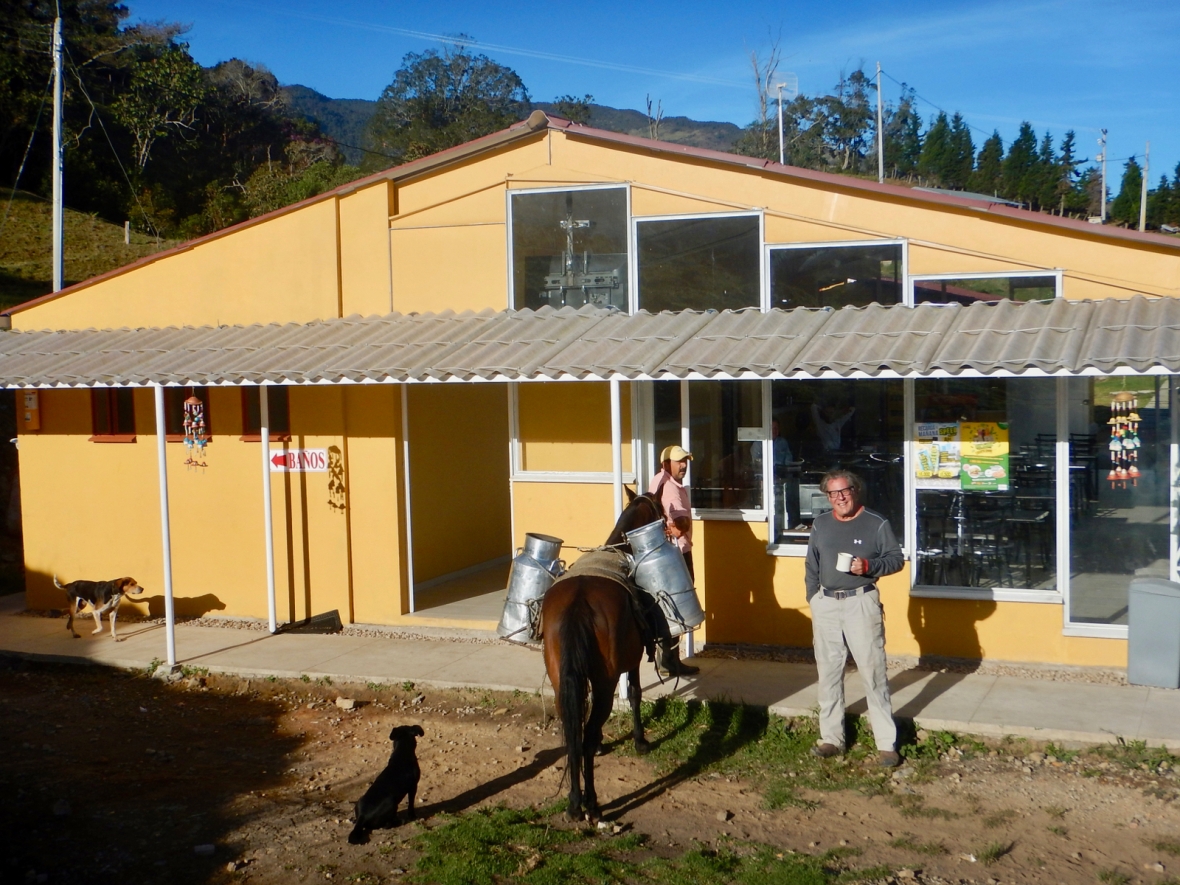 On our way to Bogota we stayed overnight in the parking lot of this road side restaurant, in the morning they got their milk delivered in these containers carried by a horse, Joe got  fresh milk for his coffee!

While in Guatape with the kids (August 2, 2017) we applied for another 90 days on our tourist visa on the immigration website. Now we had to get an extension for our vehicle’s TIP (temporary import permit) with Colombia’s Customs agency called DIAN. To do so, you need to show that your tourist visa was extended. The whole process turned out to be quite a nightmare, we had to visit their office on three separate occasions, go to the immigration office to be turned away after waiting in line for a few hours because we had applied on line and had selected the Medellin office has the closest office … We finally got our extensions after 10 days! On the up side, it gave us the opportunity to discover Bogota.

With almost 8 million inhabitants Colombia’s Capital is the fourth most populous Latin American city after São Paulo (Brazil), Mexico City (Mexico) and Lima (Peru). Often skipped by tourists, because of safety concerns, we found that overall it was safe if you avoid certain neighborhoods. Taxis and Uber are cheap making it easy to get around even though the traffic can be crazy during the morning and evening commute.

When we arrived in Bogota, Mariana, our daughter in law, was visiting her family before going back to Florida with the grandkids so we spent one last day with them at El Tambor Multiparke just outside of Bogota. Mariana used to go there with her cousins when she was a kid so it was nice for her to share this with her own kids.

The next day (August 11, 2017), we met up with our friends Mark and Christine to attend a wonderful concert of Colombia’s National Symphonic Orchestra at Teatro CAFAM.

The Orquestra Sinfónica Nacional de Colombia directed by the charismatic American guest conductor David Effron with the voice of a beautiful soprano Betty Garces.
It filled our hearts and brought tears to our eyes. 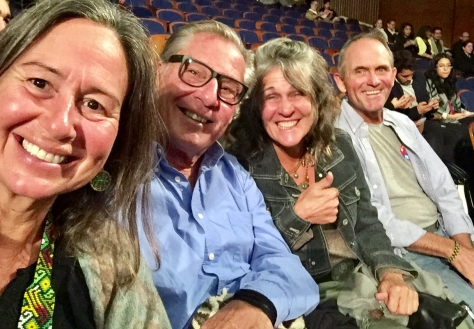 Thank you Christine and Mark for the invitation and for sharing this moment with us.

Bogota’s historic district called La Candelaria, is the heart of the City where you will find the colonial cathedral and the no Classical Capitol on the very large Bolivar Plaza, cobbled streets with restaurants serving traditional dishes like ajiaco (chicken and potage soup) and shops selling emeralds and handicrafts and two of Bogota’s best museums: The Gold Museum and the Botero Museum. 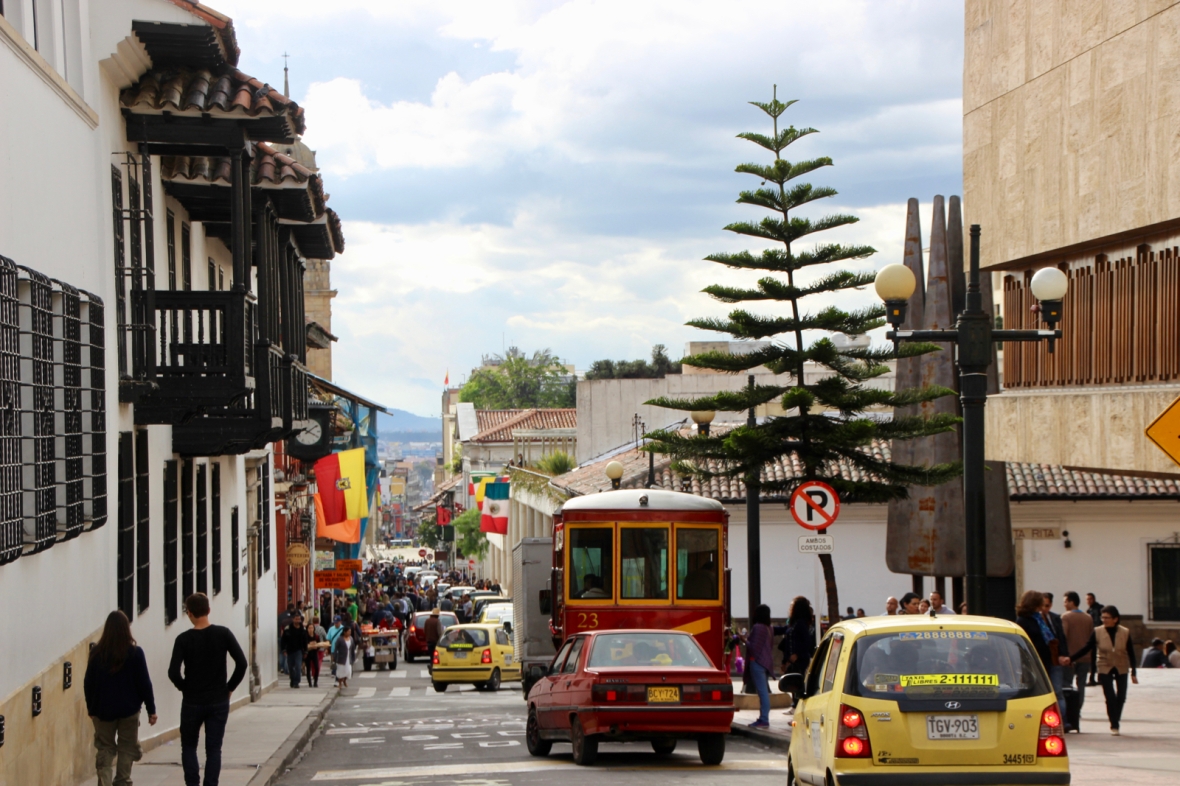 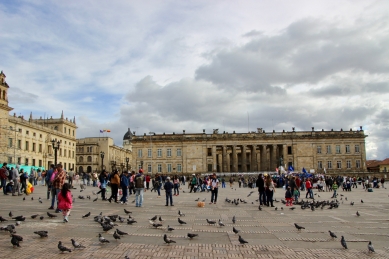 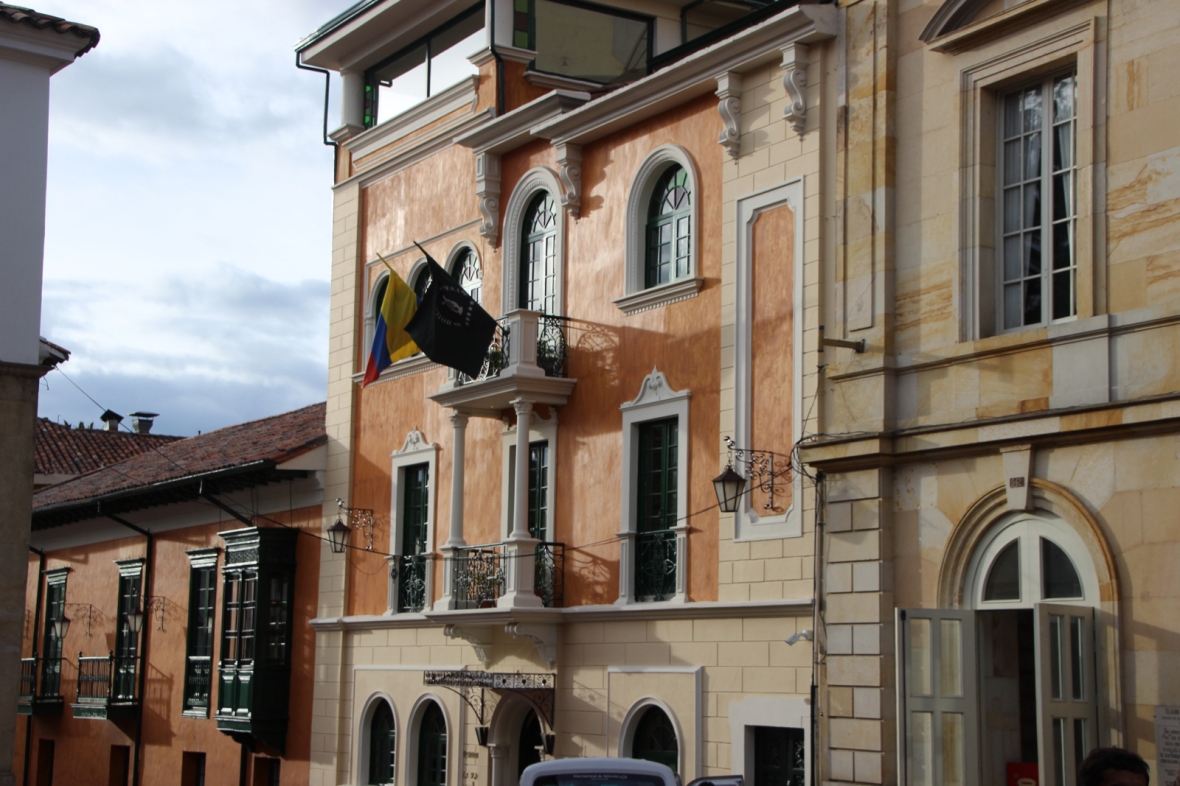 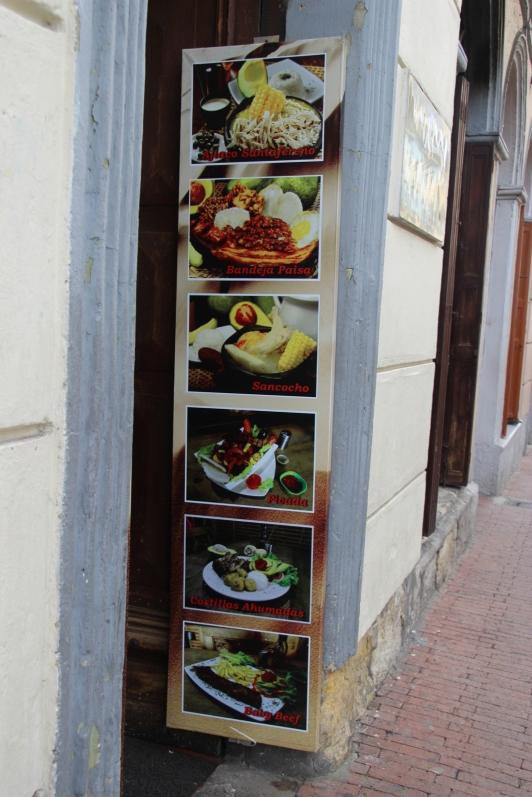 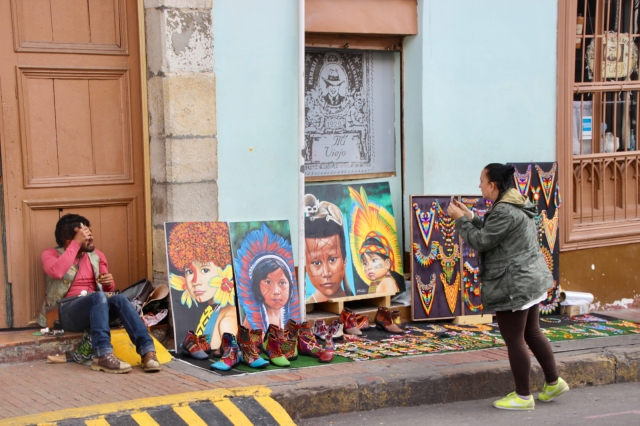 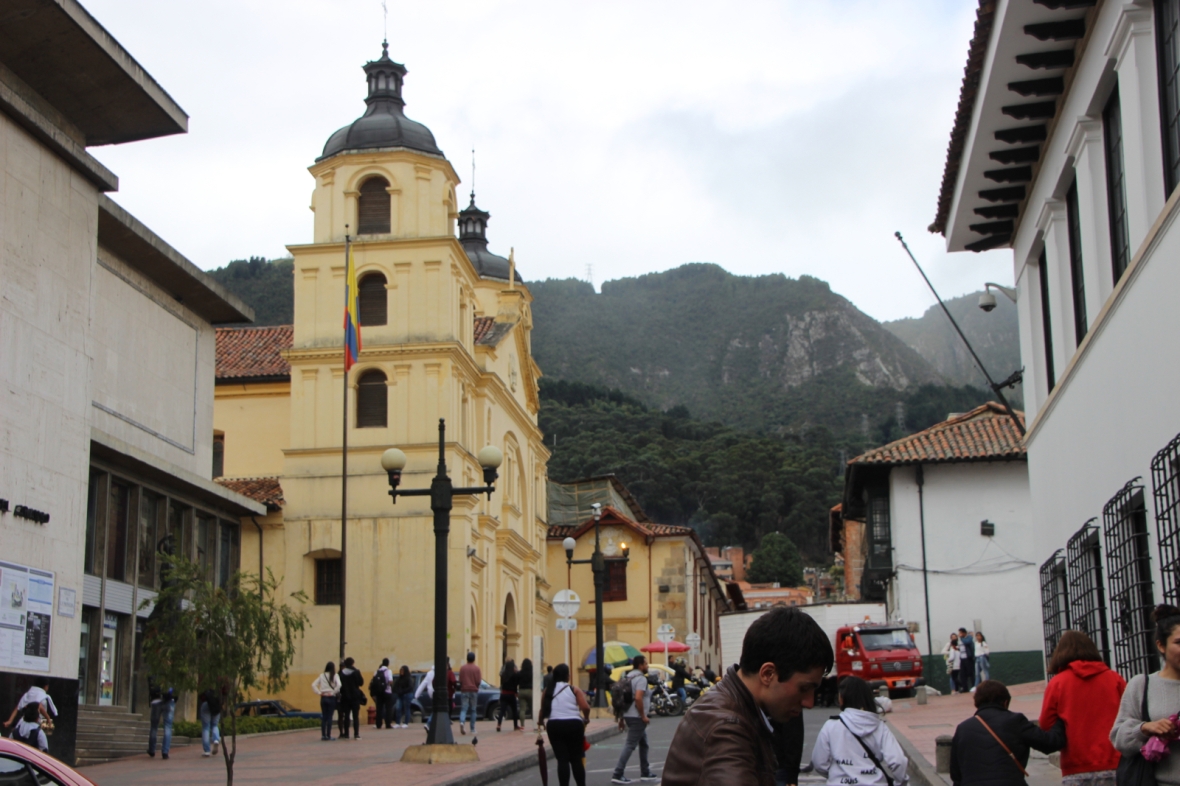 We spent a few hours at the Gold Museum, one of the most visited touristic highlights in Colombia. It displays a selection of pre-colombian gold and metal alloys and contains the largest collection of gold artifacts in the world.

“Masks in the form go skulls or lifeless faces were placed on the dead person, one on top of the other. Most Malagana gold work was made for funeral regalia”

One of the most important piece, Muisca raft also referred to as the El Dorado Raft is an artistic figure of pre-Colombian gold drawn between 600 and 1600 AD. It was discovered in 1969 near Pasca, it refers to the ceremony of the legend of El Dorado.

“When the chieftain covered himself in gold, he appropriated the seminal, creative power of the sun.”

Fernando Botero, Colombia’s most prolific artist and sculptor, known for his very unique style depicting people and figures in large, exaggerated volume, donated more than 120 of his own pieces along with 85 pieces of other international artists from his private collection to the Bank of the Republic and the museum was founded in 2000. Definitely a must when visiting Bogota. Free admission, so no excuse!

From the outside the Botero Museum doesn’t look like much but as soon as you walk in, you will be surprised by the beauty of the building itself , an old colonial mansion, but also by the quality of the collection. 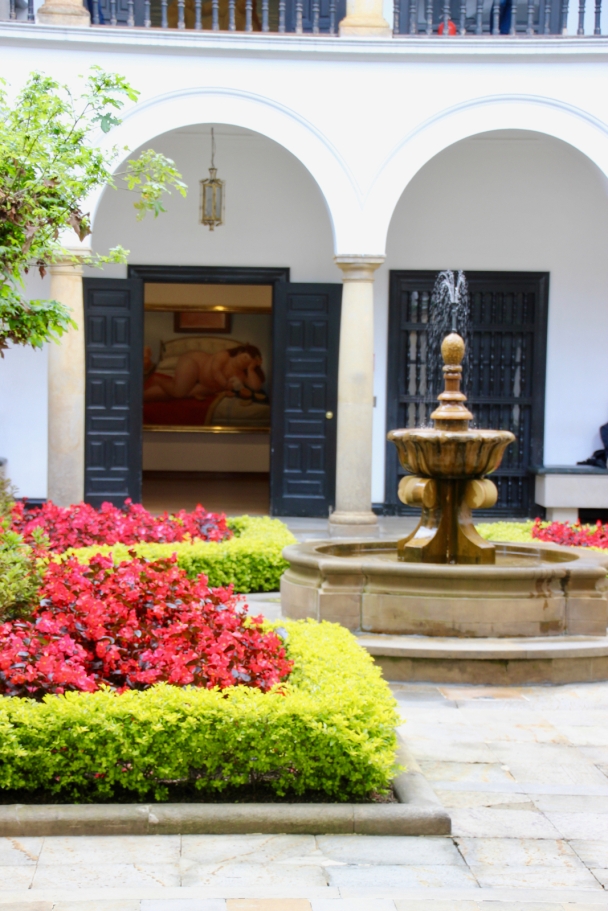 Then, this absolutely gorgeous courtyard with fountains, flowers and bushes! 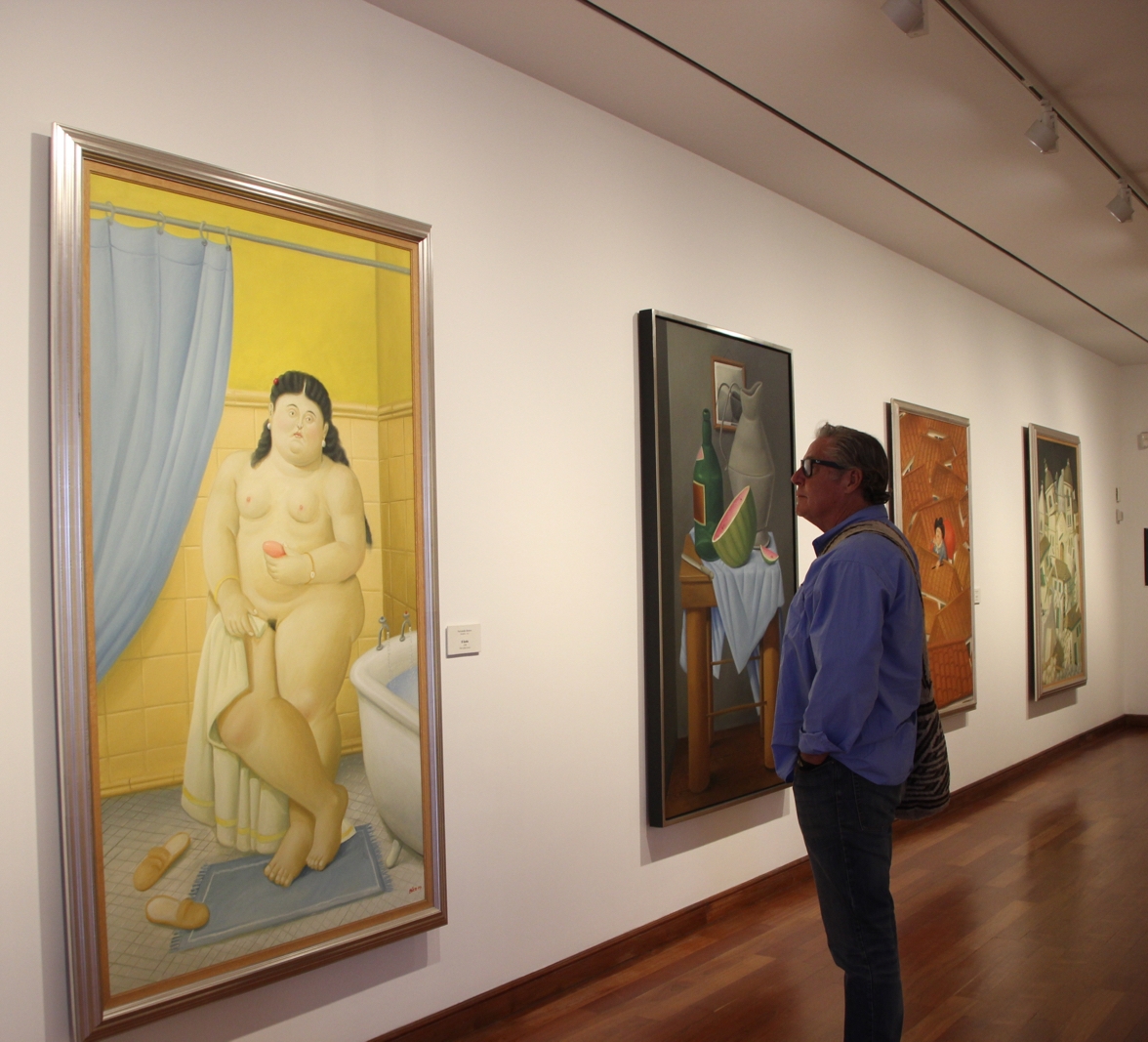 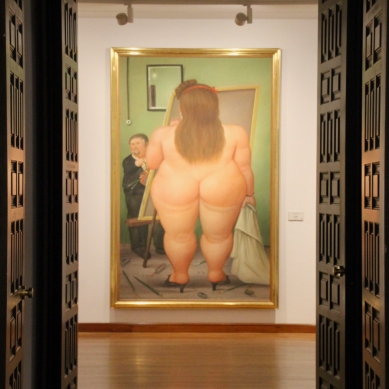 We stayed in the more “ritzy” neighborhood of La Cabrera amongst tall condominium towers where you will see more nannies and dog walkers then actual residents. On the weekends, parks, fancy Cafés and restaurants are crowded with well dressed Rolos or Cachacos! 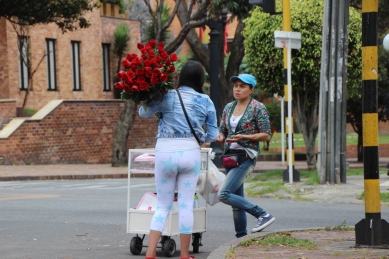 A memorable evening at the legendary restaurant: Andres Carne de Res DC. We highly recommend visiting the original Andres located in Chia outside of Bogota. 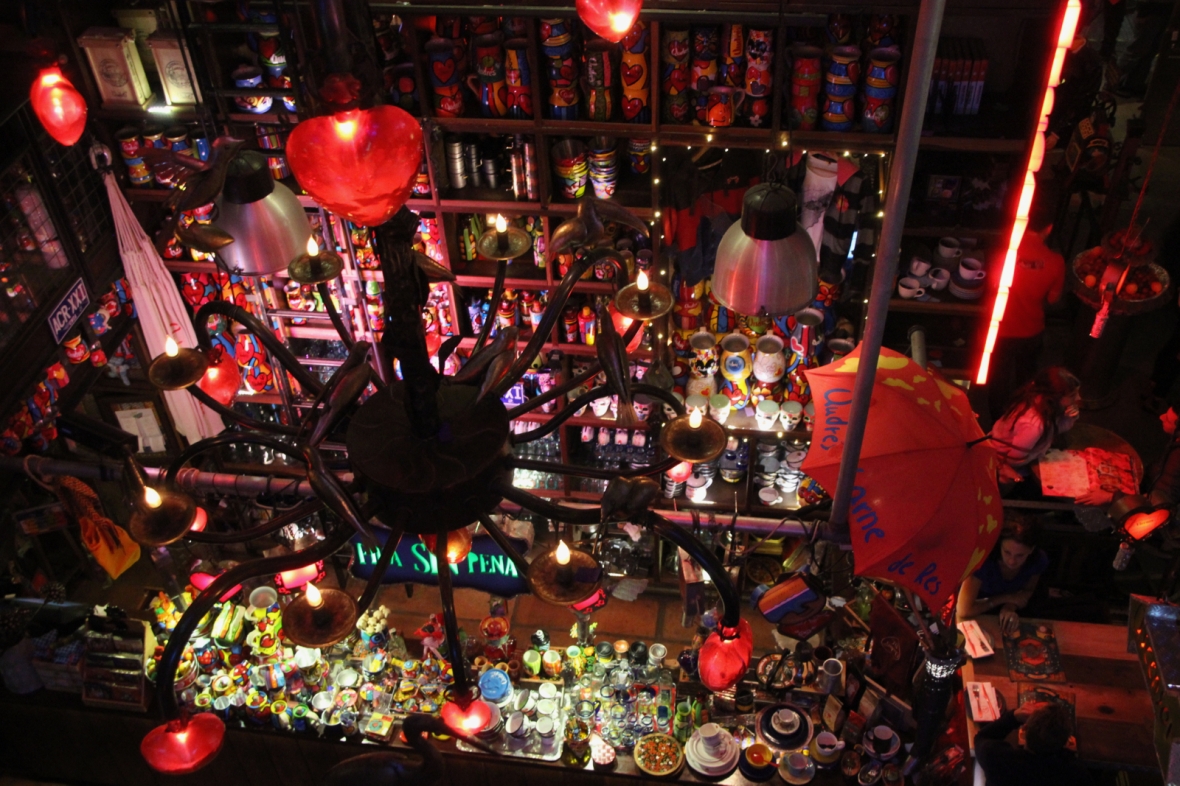 We took a quick and pleasant ride in a cable car up 3,152 meters above sea level to visit Monserrate a popular mountain where pilgrims flock to visit the white church with it’s altar statue of the Señor Caído (Fallen Christ), dating from the 1650s, to which many miracles have been attributed, we’ve heard that some pilgrims even go up the mountain on their needs!

The top has gorgeous views of the 1700-sq-km capital sprawl. On a clear day you can even spot the symmetrical cone of Nevado del Tolima, part of Los Nevados volcanic range in the Cordillera Central, 135km west.

View of the very spread out Bogota from Monserrate

I’m sure that by now you have noticed that our blog posts are way behind. Even though I enjoy writing it, I don’t want it to become a burden and the internet being what it is in remote areas of South America, I only write when I have a long period of down time and good wifi.

One thought on “Colombia, Part 4 Medellin and Bogota”